I am thrilled to be hosting a spot on the PAOLA SANTIAGO AND THE SANCTUARY OF SHADOWS by Tehlor Kay Mejia Blog Tour hosted by Rockstar Book Tours. Check out my post and make sure to enter the giveaway! 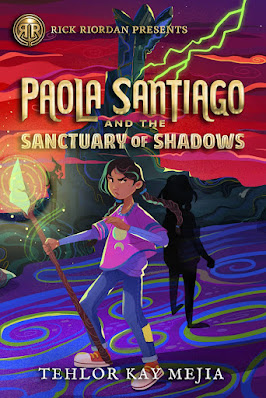 Title: PAOLA SANTIAGO AND THE SANCTUARY OF SHADOWS (Paola Santiago #3)

“Paola Santiago is a whip-smart Latina who dares to explore the shadows between folklore and middle-school friendship. A thrilling adventure.”–Nina Moreno, author of Don’t Date Rosa Santos

Paola Santiago has recently returned from Oregon, where she defeated the Hitchhiker ghost and saved her father from the vengeful spirit that was possessing him. The poor girl deserves a rest! But first she has to rescue Dante from the void, where he’s been imprisoned by some unknown force. Even though Dante has turned against Pao, she can’t just leave him there–they’ve been friends for too long.

Paola’s prophetic dreams seem to have dried up, so she has to find other ways to locate a new rift where she can enter the void. Signs point to Texas–but how is she going to get there from Arizona? It just so happens that Emma’s new group of politically active friends, the Rainbow Rogues, are planning a field trip to San Antonio. It’s the perfect ruse for Paola, if she can stand being with the judgmental girls for that many days. . . .

Relying on her wits, training from the Ninos de la Luz, and the emotional support of her best friend Emma, Pao makes it into the void. Once there she must face down not just one but two enemies: El Cucuy, the bogeyman . . . and someone even scarier who looks a lot like Pao herself.

This third exciting journey into Mexican folklore has our lovable, intrepid protagonist making discoveries both wonderous and fearsome.

Grab the first 2 books in the PAOLA SANTIAGO now!

Book 1 is FREE with a Kindle Unlimited Subscription!

Paola Santiago is back again! This is the third installment in the series. So without going into details and revealing spoilers, I'll just say this. Paola is one of my favorite Middle grade heroines. She's witty and has an uncanny knack for knowing what true friendship is. She's also a bit of a bad ass… Pardon my language. The world building is top notch and the plots are always fun and intriguing. The character growth from book one until now is totally believable. If you're into middle grade check these books out! 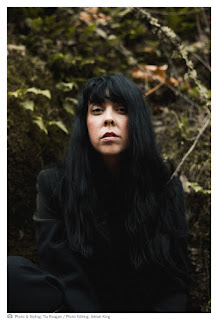 Her debut young adult novel, WE SET THE DARK ON FIRE, received six starred reviews, as well as the Oregon Spirit Book Award for debut fiction, and the Neukom Institute Literary Arts Award runner up honor for debut speculative fiction. It has been featured on Seventeen, Cosmopolitan, and O by Oprah Magazine’s best books lists, and was a 2019 book of the year selection by Kirkus and School Library Journal. Its sequel, WE UNLEASH THE MERCILESS STORM, followed to continuing acclaim, while MISS METEOR (co-written with National Book Award Nominee Anna-Marie McLemore) was named to the American Library Association’s 2021 Rainbow List, honoring outstanding contributions in LGBTQIA teen fiction.

Tehlor’s debut middle grade novel, PAOLA SANTIAGO AND THE RIVER OF TEARS, was published by the Rick Riordan Presents imprint at Disney/Hyperion. It received four starred reviews, and was named Amazon’s best book of 2020 in the 9-12 age range. It is currently in development at Disney as a television series to be produced by Eva Longoria.

Tehlor lives with her daughter, partner, and two small dogs in Oregon, where she grows heirloom corn and continues her quest to perfect the vegan tamale. She is active on Twitter and Instagram @tehlorkay.

1 winner will receive a finished copy of PAOLA SANTIAGO AND THE SANCTUARY OF SHADOWS, US Only.